WHY IS LAKE MEAD DRYING UP?

Lake Mead, located on the Colorado River just outside of Las Vegas, Nevada, is a vital source of water for millions of people in the southwestern United States. However, in recent years, the lake has been experiencing a severe drought and its water levels have been rapidly declining. This has raised concerns about the future of the lake and the communities that depend on it. In this article, we will explore the reasons why Lake Mead is drying up and the potential consequences of this trend.

As a 8 year resident of Nevada myself I can affirm that Lake Mead has dropped to a dangerously low level at an alarming speed. Which leads to many questions such as: will Lake Mead ever refill, how low is the water at Lake Mead and what does Lake Mead look like now? Below is  a graph that shows the water level of Lake Mead for the end of every year since 1935. 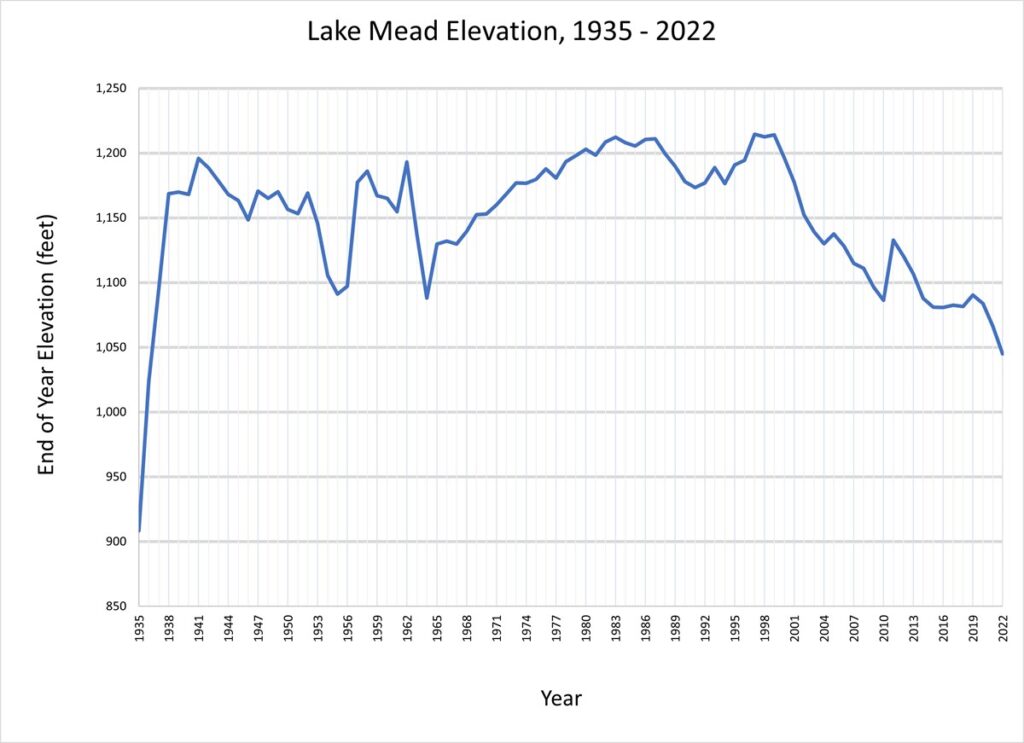 The main reason for the drying up of Lake Mead is a combination of factors, including population growth, climate change, and mismanagement of water resources. The Colorado River Basin, which supplies water to Lake Mead, has been experiencing a prolonged drought for over a decade. This has led to a decrease in the amount of water flowing into the lake, which in turn has caused the lake’s water levels to drop.

The population of the southwestern United States has been rapidly growing in recent years, and this has put a strain on the region’s water resources. As more and more people move to the area, they are using more water, which has led to a decrease in the amount of water available to fill Lake Mead. Additionally, the increasing demand for water has led to the overuse of the Colorado River, which has further decreased the amount of water flowing into the lake.

Climate change is also playing a role in the drying up of Lake Mead. The southwestern United States has been experiencing a warming trend in recent years, which has led to an increase in evaporation rates. This means that more water is evaporating from the lake, which further decreases its water levels. Additionally, the warmer temperatures have also led to an increase in the frequency and severity of droughts, which exacerbates the problem.

Finally, mismanagement of water resources is also a contributing factor to the drying up of Lake Mead. The Colorado River is a complex system, and the various states and entities that use its water have not always cooperated effectively in managing it. This has led to overuse of the river and a lack of coordination in dealing with the drought, which has further exacerbated the problem.

The consequences of the drying up of Lake Mead are severe. The lake is a crucial source of water for millions of people in the southwestern United States, and its decline will have a major impact on the region’s economy and way of life. Additionally, the lake is also a major source of hydroelectric power, and its decline could lead to an increase in energy costs.

In conclusion, the drying up of Lake Mead is a complex issue caused by a combination of factors, including population growth, climate change, and mismanagement of water resources. The consequences of this trend are severe and will have a major impact on the lives of millions of people in the southwestern United States. It’s crucial that we take action to address the causes of this problem and work to find sustainable solutions before it’s too late. So the looming question of everyone living in the southwest becomes; what happens if Lake Mead goes dry?

I myself am not expecting the government to come to the rescue but luckily for us there are revolutionary new technologies that can can extract water from air! Sounds a bit unbelievable but if you would’ve told people 100 years ago about cell phones they would have laughed. Click the link below for information on this new technology as we you might need it in the days to come.